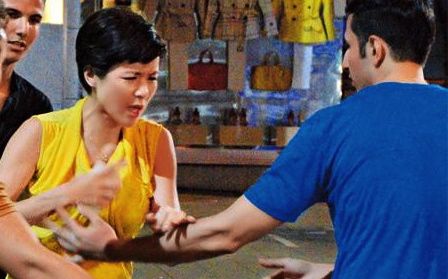 Aimee Chan allegedly was molested by extras while filming for Outbound Love <單戀雙城> in Malaysia.

Tabloids reported that while filming for a sexually harassment scene, some extras had deliberately took advantage of Aimee and stroked her back, hugged her and even touched her breasts. Although the TVB actress was extremely terrified, none of the cast and working crew stepped in to help her.

While attending an event, Niki Chow was asked about the incident. Appearing to be shocked over the news, Niki said, “Is it true? Did Aimee clarify? Perhaps this is just the plot! There are many extras and professional actors during the filming and we can’t decide who to work with.”

Niki said that she would report the matter to the director if she were to encounter such unpleasant incident.