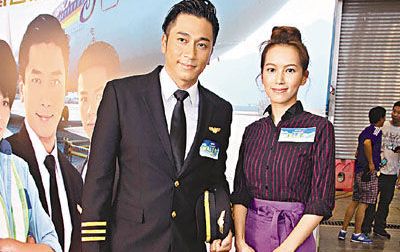 Although Kelly Fu has hinted of a possible relationship with Ron Ng, the pair was awkward at the press conference of Triumph in the Skies II <冲上云霄II> yesterday.

The couple kept a distance from each other and had no interaction at the press conference. Although Ron and Kelly eventually allowed the reporters to take a picture of them, Ron immediately dashed off after the photo-taking.

Appearing to be very agitated, Ron has once again dismissed his rumours with Kelly.

“You are all wrong. I have said it so many times that she is not my girlfriend. She is only a friend. We are not dating. She clarified to me that she had not spoken anything about being my girlfriend. It was the reporter who twisted the fact.”

When asked if he was being used as a publicity, Ron said, “If only it can help [Triumph in the Skies II] (Did you befriend the wrong person?) These are all your words! (Are you unhappy about it) No, I treat it as a publicity.”

Lastly, Ron emphasised again, “I have no feelings!”

On the other hand, Kelly clarified that it was only a language misunderstanding and said that they were good friends be it on screen or off screen.