Specially filmed in Shanghai and Zhejiang, TVB blockbuster drama Silver Spoon, Sterling Shackles  will air on 22 October 2012 in Hong Kong. To commemorate TVB’s 45th anniversary, the 40-episode mega budget drama has a star-studded cast of 30 over veteran and popular actors and actresses of the TV station.

Against the backdrop of the 1930s in the British Hong Kong, Silver Spoon, Sterling Shackles centres around the lives of a large and influential Chung family and women tussle within the household.

Damian is the first Chinese barrister in the British Hong Kong. Although he studies abroad and leads a westernised lifestyle, he is still a deeply rooted traditional Chinese man. Having many wives is a symbol of power and status in the society.

Damian’s first three wives are from noble family, except Tavia, a opera singer who later marries him out of gratitude and admiration. However, Damian loves his second wife, Idy the most. When he knows that she met her ex-lover Ben Wong (黃智賢), jealousy takes over him. Damian intentionally shows his favouritism to Tavia to spite Idy.

On the other hand, Kenneth idolises his father since young. Following his father’s footsteps, Kenneth becomes a barrister too. With a modern mindset, Kenneth is determined to abolish the system of Polygamy and slavery, and resulted in conflicts with his father.

The family is also tearing apart when Vincent falls out with Damian and Sire marries a poor man despite the objections of her father. Ron also plots revenge on the Chung family.

In a scene, Tavia bites Damian’s lips when he forcefully kisses her. The scene looks very real with Tavia kissing very hard with Damian and bites his lower lip. This is a breakthrough performance for Tavia which is different from her doctor, police or sweet girl roles. 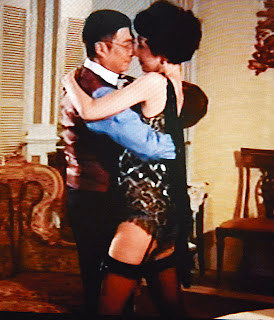 Speaking about his intimate scenes with so many “wives”, Damian said, “Kissing is a small matter but all the wives are so beautiful. It looks so real when they are sexy and immersed in the intimate scenes.”

Damian also leaked out the spoilers and mentioned that he will join hands with Kenneth to abolish the polygamy and slavery system. “After my first wife dies, my character changes a lot. My second and third wife all found their true loves At the end, I finally realise that I love Tavia the most and will court her all over again,’ said Damian.

Barbie Hsu denies falling out with husband over money