Known as the Mr Nice Guy in the entertainment industry, Chilam Cheung’s (張智霖) temper had a rare eruption!

While filming with Fala Chen, the PA were still discussing if Fala needed to carry a handbag in the scene. Feeling irritated, Chilam said, “Whether there is a handbag or not, we just go ahead and film first!” 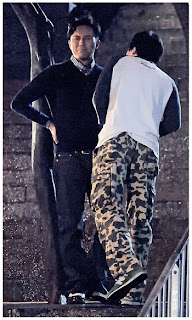 Chilam let out his frustration on Weibo and wrote, “I strongly urge the PA colleagues of ‘Triumph in the Skies 2’ to go and find another job! Although acting is part of the entertainment industry, but we need to treat it seriously. All the messy schedules and ridiculous arrangement, besides being disrespectful to the actors, it will also ruin the television industry. It is also disregarding the viewers! The downfall of the Hong Kong television dramas depend on you!”

Many Chilam friends poured in their consolations to him. Felix Wong (黃日華) wrote, “Cool down! Do not be angry! The best is to learn from me. Tear away them, do not accept!”

Chilam’s wife, Anita Yuen (袁詠儀) also replied to Chilam’s angry post, “Wah! You (PA) really deserved to be given a spank at your butt for making a high EQ Mr Cheung so angry! All of you need to reflect and reflect. Mr Cheung! Please do not be angry, do not hurt your health.”

After receiving consolations from his wife and friends, Chilam cooled down and joked that the brand of drinks which he endorsed had dispersed his anger.

However, he did not forget to mock at the professionalism of the PA, “I suddenly realize that the person who should apologise is me. I should not set the standards too high. I overestimated your standards. Sorry!”

It is not the first time that TVB PAs had blundered the filming schedules. Chilam co-star in the drama, Francis Ng (吳鎮宇) was given the wrong filming location before, making him drove in circles for an hour to find the exact location.