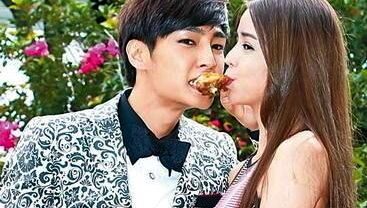 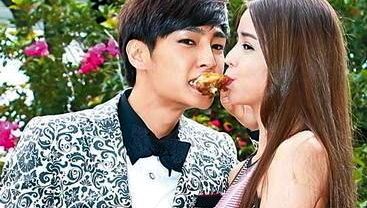 Taiwanese idol drama, Fall in Love with Me <愛上兩個我> has broken record ratings after it aired just the second episode and even tops the ratings chart.

Yesterday, the cast of Fall In Love with Me celebrate the good ratings by treating themselves to fried chicken.

Since the drama is aired, many viewers have given positive reviews about the onscreen couple, Aaron Yan and Tia Li. Fans go frenzy over Aaron’s “super attentiveness” in an episode where he had to kneel down to tie the shoelace for Tia.

Giving tip to the girls, Tia said jokingly, “All girls should just wear sports shoes when going out, and they have to tie their shoelaces loosely.”

With that, Aaron responded, “A man has gold underneath his knees. He should only kneel when he is moved by the girl. If not, it will cause misunderstanding.”

Another lead actor, Jack Lee’s role is also popular with the female viewers. Even Tia poked fun of Jack, saying that her sister is a fan of his.

“My sister loves you so much. She even has your photos and wants to visit you at the filmset,” said Tia.