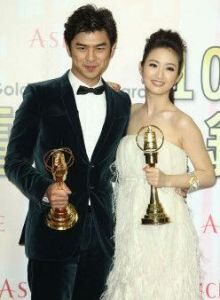 At the 47th Golden Bell Awards, Ariel Lin (林依晨) and Bolin Chen (陳柏霖) won the Best Leading Actress and Actor for their series, In Time with You <我可能不會愛你>.  The annual award is a television production award, which is Taiwan’s equivalent to the Emmy Awards.

Ariel was shocked when she heard her name during the announcement of Best Leading Actress. She said, “I didn’t even prepare my winning speech!”

This is the second time Ariel bagged the Best Leading Actress award. She was also conferred the Best Actress title in 2007 for her series, They Kiss Again .

Speaking about her thoughts for winning the award again, Ariel said, “Winning is very important the first time. For this time, it’s more like attending a gathering.”

For Bolin, it is his first award in his acting career. He expressed his excitement while collecting the award on stage and exclaimed, “My heart beats very fast, so it feels this way.”

Asking about his thoughts on beating his competitors which include Long Shao Hua (龍劭華) and Huang Pin Yuan (黃品源), Bolin said, “I really do not know what’s the reason, but I feel very honoured.”
Ariel and Bolin’s series, In Time with You also won the Best Television Series Award for the evening.