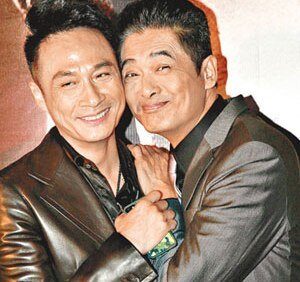 Chow Yun Fat (周潤發) is a self-proclaimed TV addict and loves to catch the dramas on television.

Attending an event to promote his new film The Last Tycoon , the movie superstar was asked on his thoughts on the upcoming TVB Anniversary Awards. Chow surprised the media when he could name the nominees and was even familiar with the dramas that was airing recently.

“The TV Queen is between Myolie and Tavia, but I watched Tavia’s performance more at the later episodes. When I came back, I only managed to watch Kate’s final few episodes. Kate acted quite well for the drug-taking scenes”.

Asked on the performance of veteran actor, Damian Lau (劉松仁) in Silver Spoon, Sterling Shackles , Chow said, “Good! How can it be bad? However, he is not the ‘biological son’ (non-contract artist of TVB)!”

In related news, Francis Wu (周潤發) also shared his excitement about working with Chow. “I told my friends that I will be working with Chow Yun Fat in a movie, but I will act as a villain. My friend asked me back, What more do you want?”

Myolie thrilled to be named by idol

When told that Chow Yun Fat picked her as the hot favourite to win the TV Queen award, Myolie shrieked with excitement like a little fan.

“Are you sure this is true? Yeah! Did he mixed up between Tavia and Myolie? I am really flattered and surprised. I will keep on working hard and have to thank him”.

Asked if Chow felt that she was better than Kate, Myolie said, “Please do not say that. Everyone is good”.

Myolie also said that she would not give herself too much stress about winning the award and will face it calmly.