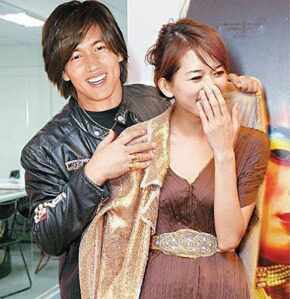 Two days ago, Jerry Yan (言承旭) was spotted shopping at H&M store in Shanghai. It is also coincident that Lin Chi-ling (林志玲) was in Shanghai for her photoshoot, leading to speculations if the pair had arranged to meet there.

According to the couple’s close friends, Jerry and Chi-ling’s romance blossomed in 2000. After F4’s popularity shoot up, Chi-ling allegedly often accompanied Jerry on his concerts and even hid at the spectators’ seats to watch his performance.

Chi-ling’s modelling career took off in 2005 and became more prominent. However, photos of Jerry and Chi-ling wearing bathrobes were leaked after she sent her phone to repair. In July 2005, Jerry rushed to visit Chi-ling who was hospitalised after falling down from riding a horse during a commercial shooting. Hence, romance of Jerry and Chi-ling surfaced after the two incidents.

In 2006, the couple officially broke off. At an interview, Jerry also stated that he not could give his other half a sense of security. Although he did not specifically name anyone, the public linked it to Chi-ling.

The couple’s friend also disclosed that Jerry and Chi-ling paid close attention to each other news through their friends even after spliting up. Chi-ling allegedly packed her work schedule so that she had no time to think about her relationship with Jerry.

In regards to the coincidental appearances in Shanghai, both Jerry and Chi-ling’s managers denied that they were meeting each other. Jerry’s manager said, “He is working and staying at a short period of time. He only went to buy something. It’s impossible to meet up.”

Chi-ling’s manager also expressed that she was busy with the photoshoot and had no time to meet Jerry.