Eason Chan and Hilary Tsui’s marriage on the rocks? 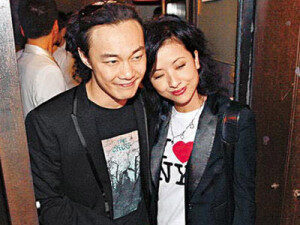 After the drug scandal surfaced, Hilary Tsui’s (徐濠萦) reputation was badly hit. Recently, a group of 23 Hong Kong artists reportedly were involved in a drug party at the restaurant of Suki Chui’s (徐淑敏) husband, Kenny Wee (黃浩) and Hilary was rumoured to be one of them.

Two days after the scandalous report, Hilary was said to have posted a photo of Kenny on her instagram and made mockery remarks on him. The matter was blown up when Kenny’s photo and her mockery remarks were circulated around. In return, Kenny angrily lashed out at Hilary’s act and even threatened to make a police report.

Tabloids claimed that Eason was already upset with his wife’s scandal. Hilary’s act towards Kenny reportedly outraged Eason. As Eason was worried that the scandal might affect his daughter Constance Chan, he rushed home immediately to question his wife.

Unremorseful of her act, Hilary reportedly angered Eason so much that resulted in him hurling vulgarities at his wife. Hilary allegedly packed her suitcase and left for Japan without informing her husband.

When asked if her parents quarrelled and why her mother did not pick her from school, Constance snapped at the reporters, “Too bad! Stupid!”

On the other hand, Eason reportedly plans to take a 6-month break from work starting from April next year to mend his marriage with Hilary.