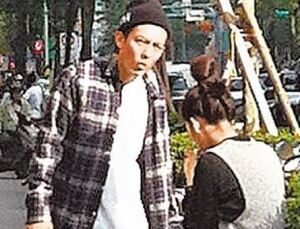 Edison Chen was spotted scolding his girlfriend, Angela Meng publicly at the streets of Taipei.

An eye witness revealed that the couple was quarrelling openly at East Taipei last week. Edison reportedly was very fierce towards his girlfriend and allegedly pointed his middle finger at her.

However, it seems that the couple has patched things back as Edison had brought his girlfirend to his godfather, Anthony Wong’s musical show a few days ago. The 32-year-old subequently uploaded a group photo on his Weibo.

Responding on the couple’s tiff, Edison’s manager said, “We just watched the musical show in Hong Kong together. As I am not around last Friday, I do now know what is going on between them?”

His manager also said that Edison could be only complaining to his girlfriend about the loss of his manager. His manager will end his working relationship with Edison end of the year, and hence Edison is very anxious to find a replacement.