Ekin Cheng and Yoyo Mung to marry next year 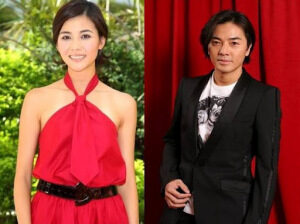 After dating for several years, 44-year-old Ekin Cheng (鄭伊健) and 37-year-old Yoyo Mung (蒙嘉慧) are finally tying the knot! At his concert celebration, Ekin shared the happy news that he would marry Yoyo next year.

At his Light and Shadow concert in Hong Kong, Ekin was teased by his good friends, such as Jordon Chan (陈小春), Chin Kar Lok (錢嘉樂) and Leo Ku (古巨基). Ekin was embarrassed on the stage by his friends’ constant grilling on his wedding plan. He also blushed when Jordon wanted to invite Yoyo and her familiy on stage. The audiences also shouted for Ekin to propose publicly to Yoyo.

Ekin declined to reveal his wedding date, “It’s such a personal matter. Anyway, we have not get married. We will inform everyone when we get married. It’s not this year, it’s next year. I won’t disclose the date and venue because it is so personal.”