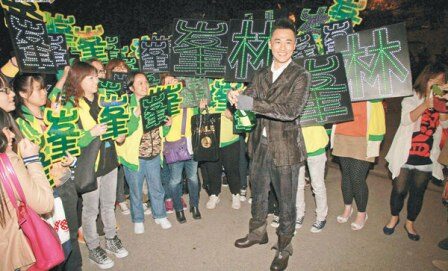 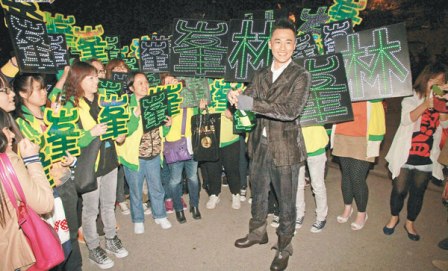 Seen as a hot favourite to clinch the TV King, Raymond Lam is widely bet as the winner due to his huge fan base. However, many jaws were dropped when Wayne Lai was declared the Best Actor instead. Even the My Favourite Male Character award was clinched by Kenneth Ma.

Raymond’s fans came in with champagne and banners, preparing to celebrate the victory with him. It turned out to be a huge disappointment for his fans, as Raymond left home empty-handed that evening. Many fans were emotional and cried over Raymond’s TV King loss.

Some were outraged with the results and found it hard to believe that his votes were lower than Wayne. Some even engaged in a spat with Wayne’s supporters and demanded to see the vote counts.

After the awards ceremony, Raymond’s fans stayed behind to support him. As some fans started to cry, Raymond even had to console them.

Asked about his feelings about the TV King loss, Raymond replied, “I am a little disappointed, but it can’t be helped. I want to thank my fans and friends who voted for me”.

“Every nominee is a hot favourite. I will take it in my stride but I feel that this year’s contest is very exciting and thrilling. I met Wayne at the backstage before the ceremony and told him that I was slightly nervous because there were so many fans supporting.” 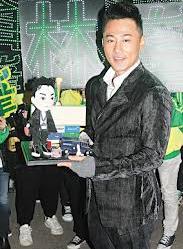 Despite losing the awards, his fans presented him with a bottle of champagne to encourage him. A weeping fan also showered him with a self-made Happy Sir figurine and said, “You will forever be our best actor!”

Overwhelmed by the fans’ support, Raymond replied, “Please do not cry. I am so sorry”.

“To me, you are considered the best award,” said Raymond to his fans.