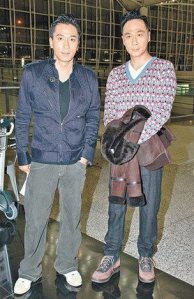 While filming for “Triumph in the Skies 2” (冲上云霄2), there were reports that Francis Ng (吴镇宇) had scolded Ron Ng (吴卓羲) everyday for his poor working attitude. A a promotional event, Francis admitted and expressed that it was a common communication between men.

Refuting reports that he was displeased with Ron, Francis said, “I have never been unsatisfied with Ron, but I really scold him everyday. Whatever he does, I will scold. That’s how men are, this is how we interact with each other. The script is also similar.”

Recently, Ron had just broken off with Viann Zhang (张馨予). When asked if Ron had been affected by his relationship problems, Francis spoke that he had not discussed with Ron. However, Francis said, “When he sees me, he is so happy! I praised that he improved so much as compared to ten years ago!”