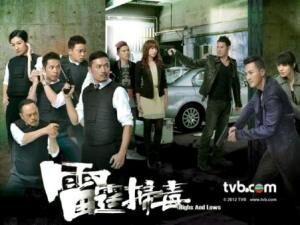 A police vehicle spotted a 7-seater car parking at Tsat Sing Kong at New Territories, Hong Kong. The policemen checked out the car with their torches and discovered that an actor and actress from Highs and Lows were in the car.

The actress had undressed her panty and the actor was seen to be lying on top of her. The couple immediately put on their clothing when startled by the flashlight from the policemen. The couple pleaded with the police officers to conceal their identities. It is reported that the policemen only gave verbal warning to the couple.

After the rumour was circulated, the witch hunt for the couple started! Three couples were suspected to be involved in the car sex incident – Patrick Dunn (鄧梓峰) and Elaine Ng (吳綺莉); Geoffrey Wong (黄子雄) and Elaine Ng; MC Jin and Ella Koon (官恩娜).

Netizens claimed that Elaine and Patrick were the prime suspects of the scandal. Yesterday evening, the rumour seems to blow out of proportion and Elaine was even said to be arrested by police.

Responding on the allegations, Elaine said, “This is so ridiculous! I have people knocking on my door ten minutes ago, asking me if I am being arrested! I thought of it as a joke initially but now it blows until so big. All the media have asked me for my response. The police did not contact me at all. If I am arrested, how will I answer the calls?”

Patrick is furious over the scandal

Patrick was furious with the fabricated rumour and said that he was not close to Elaine and only had contact with her at work.

“We have children and family. The rumours are so disturbing. Produce the evidence if there is. The police will take down the car plate number and the time. Is there such evidence? It is so obvious that the news is fabricated.”

All the other artists have dismissed the scandalous news.

Geoffrey said, “Even if it’s me, I will not admit it. It is definitely not me. Although we (he and Elaine) acted a pair but we are not familiar with each other at all. Besides, she has a daughter.”

Ella said, “It is 100 percent not me. I do not owe a 7-seater car and I do not even know where is that place. I will not two-time my boyfriend.”

MC Jin’s assistant replied that he had returned to United States to visit his wife and son, and would only be back in Hong Kong next month.

Even Raymond Lam’s manager, Candy was eager to clear his name. She said, “Raymond has all along been working in China. He only returned to Hong Kong a few days ago and have been working day to night. He doesn’t have the time to go out.”

Kate Tsui said, “I did not hear of such rumours. I don’t think it is true.”