Him Law and Oscar Leung were nearly hit by car 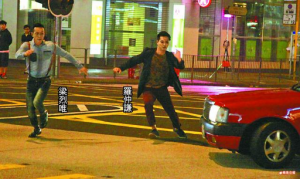 Filming for Young and Dangerous: Reloaded, Him Law (羅仲謙) and Oscar Leung (梁烈唯) risked their lives to present a more realistic scene to the audience!

Two days ago, Him and Oscar were filming a chasing scene with Sammy Shum (沈震軒) at the Nathan Road in Hong Kong. The filming was dangerous as the actors had to dash out the road once the traffic lights turned red.

During the actual filming, Him and Oscar quickly ran out to the road and was nearly knocked by a taxi which tried to beat the yellow lights. Fortunately, the taxi braked in time but the driver was upset that the pair had dashed suddenly and honked repeatedly at Him and Oscar. If the car had braked two seconds later, the pair would have been hit.

Explaining the situation, Him said, “There will always be cars on the road so we thought of running before any car drove up. It was really very challenging to shoot the scene. We thought that the taxi will stop. However, it was filmed under safe conditions. It is okay to add in some realistic scenes. Initially, I thought of running in between the cars, but the crew said it was too dangerous.”

Young and Dangerous: Reloaded is expected to release in December 2012.