Him Law spices up “Young and Dangerous: Reloaded” with his muscular chest 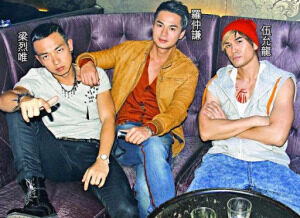 While filming in a night club in Central Hong Kong, Him was sighted with a short hairdo and wearing a V-neck shirt, revealing his muscular 42-inch chest. The scene features Oscar Leung (梁烈唯) (who played chicken) bringing Jacqueline Chong (莊思敏) into the night club.

On the other scene, Philip Ng (伍允龍) was introducing a wealthy girl (Hu Ran 胡然) to Him Law. As Him was attracted to Hu Ran, he started to fantasise Hu Ran dancing sexily in front of him.

Speaking about his collaboration with Chinese actress Hu Ran, Him said, “This is the second day that I meet Hu Ran. I do not really know her, but she has good working attitude. The actress that Jing-gor (Director Wong Jing) chose must be pretty. I will have a relationship with her in the film. There will be kissing scene but it won’t be too passionate.”

Asked if he needed to report to his girlfriend, Tavia Yeung (楊怡) about his intimate scenes, Him responded that he had his baseline and would not be able to accept explicit or topless scenes.

On the other hand, Oscar was filming a bed scene in which two hot models were undressing his pants.  Afraid that Oscar would have a physical reaction to the women during the filming, he was made to wear an extra pair of briefs on top of his underwear briefs.