Is Ruco Chan the third party between Ma Su and Kong Linghui? 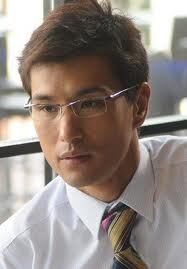 TVB actor, Ruco Chan (陳展鵬) shot to fame with his hit series “The Other Truth” . As his popularity increases, the public has also increasingly taken an interest in his love life. Yesterday, Chinese tabloids claimed that Ruco was a third party in the relationship of Chinese actress, Ma Su (馬蘇) and former Chinese national table tennis player, Kong Linghui (孔令輝). 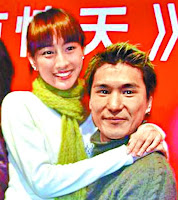 After becoming more prominent, negative rumours also increases. Ruco was romantically rumoured with his “The Other Truth” co-star, Natalie Tong (唐詩詠) while filming the series together. He was also rumoured to have an underground relationship with 2008 Miss Asia, Eunis Yiu (姚佳雯) and pretended a breakup so as to save his career.

Ruco and Ma Su were already romantically linked in 2003 while filming together in ATV series “Love in a Miracle” . Lately, Ruco and  Ma Su reportedly rekindled their love and caused Ma Su to end her 10-year relationship with Kong Linghui.

Responding to the rumours of her breakup with Linghui, Ma Su said, “It’s been so many years and I do not need any promise. I have given my youth to him. If we do not end up together, we both have problems. It has nothing to do with external factors.”
Ma Su also refuted the rumours, “Why are we rumoured to have broken off again? I think everyone is more anxious than us.”

Regarding to accusation of being a third party, Ruco responded, “I did not respond 10 years ago, and will not respond now. It’s best not to talk about it anymore. Whatever relationship between she (Ma Su) and Kong Linghui or whether they have broken up or not, what has it got to do with me?”

Ruco also expressed that he and Ma Su were only good friends and would occasionally meet up for a meal if she came over to Hong Kong or when he travelled to Beijing. Ruco also revealed that as both have been busy for the past 5 to 6 years, they have contacted less frequently but would send their greetings during festive seasons.