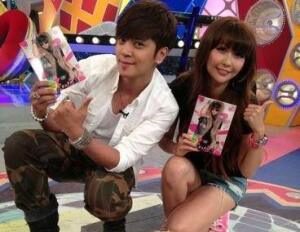 Last weekend, Show and Sister Butterfly were spotted on a vacation to Thailand and reportedly stayed in the same hotel. The pair reportedly also visited the Four-faced Buddha shrine together.

Sister Butterfly had shared on the programme before that she would return offerings to the Four-faced Buddha if she had found a boyfriend. Hence, this spark speculations if Sister Butterfly is in a relationship, especially since she was seen at the shrine with Show.

Sister Butterfly’s manager dismissed the rumours and responded that the company forbade her to date her working partner. As Sister Butterfly has housing instalments to pay, failure to adhere to the company’s regulations will cost her job.

At the recording of the 100% Entertainment yesterday, Sister Butterfly also denied the romantic rumours, stating that Show is only a brother to her. She only visited the shrine with her friend, Riva Chang (better known as Xiao Tian Tian 小甜甜) instead.

Said Sister Butterfly, “I went with Xiao Tian Tian. I did not even know he was in Thailand. I heard that someone saw Show praying at the Four-faced Buddha, so it is all true”.

Show’s manager also replied that they only knew Sister Butterfly was in Thailand when they bumped into Xiao Tian Tian at the hotel’s lift the night before his departure. As Show had to leave the next day, there was no way he could meet up with Sister Butterfly.

As Show was sighted with a woman at the airport, he replied that she was only his assistant.