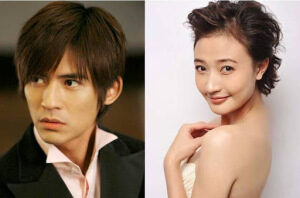 After Vic Chou (周渝民) broke off with Barbie Hsu (徐熙媛), his love life has always been a concern to his fans. Recently, Vic was rumoured to be dating mainland actress, Yan Na (阎娜) while filming for drama, Home <彼岸1945> last year.

Tabloids claimed that Vic was exceptionally attentive towards Yan Na while filming in Taiwan. After work, Vic would pick up his co-star and invited her for dinner together.

Sources from production crew disclosed that the pair had been dating secretly for 6 months. The couple first met during the film set of The Last Night of Madam Chin  and their romance blossomed while filming Home.

This is not the first time which Vic and Yan Na were romantically rumoured together. The rumours started to spread half a year ago, and recently new wave of rumours surfaced again.

Denying the romance between Vic and his mainland co-star, Vic’s manager snubbed at the reports, “Is today April Fool’s Day?”