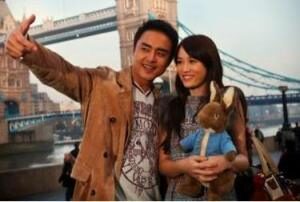 After acting together in “The prince who turns into the frog” , Joe Chen (陈乔恩) and Ming Dao (明道) have forged a close friendship and subsequently collaborated in other series. However, Joe reportedly was dropped off as the lead actress in the sequel of “Queen of SOP” , in which the popular idol series was produced by Ming Dao’s production company.

As Joe reportedly asked for an exorbitant filming fee, she was being downgraded as a guest star in the sequel. Joe and Ming Dao reportedly had fallen out over the payout.

Joe’s manager expressed that they had not received the script of “Queen of SOP 2”. Revealing that the sequel intended to target at younger viewers, Joe’s manager pointed out that the role might not be suitable for Joe.

Angered by the rumors, Joe wrote in her Weibo, “What have I done wrong? I have been seriously working hard, dilgently acted in my drama and treated everyone politely.  I have been facing everyone and anything with honesty and try to prevent any scandalous news. I do not care about the news value, what have I done wrong to deserve all these? Where do I have to hide to prevent bullet from hitting me?”