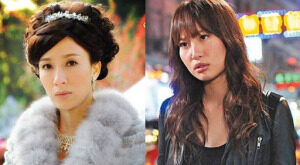 Earlier, Raymond Lam is predicted to win the TV King award due to his huge fan base. For the TV Queen award, Kate Tsui (徐子珊) and Tavia Yeung (楊怡) are currently the hot favourites.

Although Kate has only one drama this year, her Highs and Lows  has received rave reviews from viewers. Shedding her nice girl image, Kate plays a drug queen in the drama. Her gang rape scene has also created a lot of buzz on her and some male viewers even complained that the one-second rape scene was too short!

The online polls reveal that Kate is currently leading in the TV Queen race. Her popularity soars after her drug queen role is well received by the viewers.