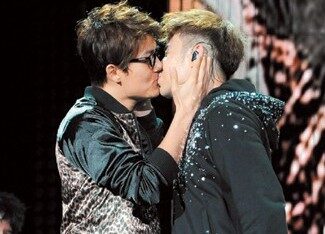 At his Release Yourself concert in Beijing last Saturday, Wilber Pan (潘瑋柏) hyped up the night when he shared a kiss with good friend Kenji Wu (吳克羣)!

For his encore performance, Wilber invited Kenji on stage to sing with him. The duo did not fail to entertain the audiences with their Gangnam Style dancing. After the dance, Wilber asked Kenji, “Do you want to flaunt your muscles?”

A zesty Kenji exclaimed, “Beijing weather is so cold. Since tonight’s theme is ‘Release yourself’, let’s play something bigger”.

Kenji pulled Wilber’s face close to him, in which Wilber was taken aback by his spontaneous act and retreated a few steps away. The fans all shouted “Go ahead and kiss!”

Upon hearing his fans’ request, Wilber agreed, “Let’s do it then”.

Before the duo began their kissing ceremony on stage, Kenji had a small request from Wilber. “We can kiss, but please do not stick your tongue out,” joked Kenji.

The two men took a deep breath and passionately kissed for 5 seconds before pulling one another away. What a treat for the fans who screamed through their lungs witnessing the comical moment by the two pop stars!

Wilber joked that this was his first attempt kissing a man. He even told Kenji, “After tonight, please do not think of me everyday”.

Wilber also entertained his fans by cross dressing as a woman in a video clip which was aired during the concert. Putting on a wig, Wilber said that it was like putting noodles over his head. He even proudly said of his feminine image, “I look like Lin Chi-ling (林志玲)!”