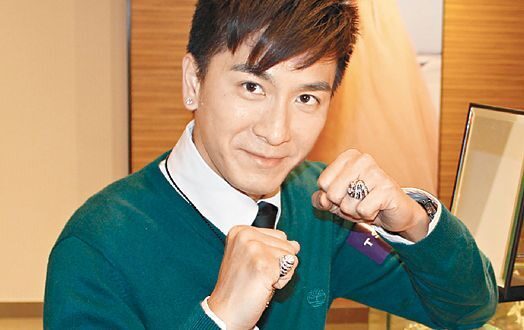 Kenneth Ma’s popularity surged after starring in The Hippocratic Crush <On Call 36小時> and more so recently after winning the Astro TV King.

Appearing at Causeway Bay yesterday, Kenneth was mobbed by hundred of fans on the street. Fans of all ages ranging from students, housewives and office ladies all surrounded him to take photos with him. Kenneth was all smiles and readily took photos with his fans one by one.

While some queued up to take photos and his autographs, some fans screamed up loud to show their support, “I love you! We watched your The Hippocratic Crush every night!”

Seeing that some passerby were flanked out to the road, Kenneth felt that it was better to leave for fear that it might cause danger to them. However, his fans were persistent and even grabbed his shirt to prevent him from leaving!

Also contesting for the TV King award, Raymond Lam is widely seen as the hot favourite due to his large pool of fans. Kenneth said, “Actually I have a lot of fans too. Wayne Lai, Kevin Cheng and Moses Chan also have many fans. It’s just that their fans will not go out to the streets to canvass for votes. I have many hidden fans. The one-person-one-vote system makes the competition so unpredictable!”

Asked if winning the Astro TV King had pumped up his confidence, Kenneth said, “Although I am taking it in my stride, it doesn’t mean that I do not want to win the award. Actually, I also want an award. Unstable actors like me will need an award for assurance.”

Kenneth subsequently went to a jewellery store to pick his accessories for the upcoming TVB Anniversary Awards. Kenneth will wear jewellery worth HK$2.5 million to the awards ceremony and preparing to be a glittering TV King.

“I specifically picked the jewellery so that even if lose, I will appear to be in high spirits!” Kenneth also said that if he won the award, he will buy a set of jewellery for his mother to thank her.