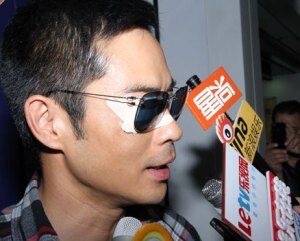 During the filming for mainland drama Ip Man in Kunshan, Kevin Cheng (郑嘉颖) injured his eye during a fighting scene.

Kevin’s eye was hit accidentally when shooting a sparring scene with a rookie martial artist. Although Kevin’s eye injury is serious and needed immediate attention, the professional actor insisted to complete the scene before returning to Hong Kong for treatment.

Upon touching down at the Hong Kong airport at 11.15 pm (25 Oct), Kevin was swarmed by reporters. Wearing a pair of sunglasses, Kevin’s right eye had an eye patch on it.

Speaking about his injury, Kevin said, “Thank you everyone for your concern. I hope to see a doctor immediately. It should be okay after sewing two stitches.”

Asked if he was worried that it might leave a scar, Kevin replied, “A man looks even more cool with a scar. I will temporary stay in Hong Kong to recuperate.” The TVB actor will also stop his filming work for now and may not even be able to attend promotional events.

Ip Man is considered the most challenging role for Kevin in his acting career. To play the legendary figure, which was made famous by Donnie Yen (甄子丹) in the movie version, Kevin had been practising the Wing Chun martial arts. Previously, his eye and neck were also injured at the film set.