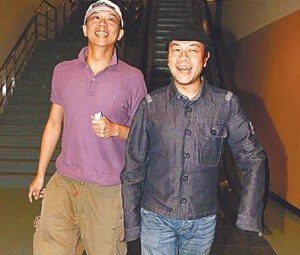 Recently, many celebrities such as Anthony Wong (黃耀明) and Denise Ho (何韻詩) had declared their sexual orientation to the public. However, Kevin Tsai (蔡康永) had already taken an advance step to admit his homosexuality in 2002 and has since been in a stable relationship with his boyfriend, George.

Lately, the Taiwanese host has released a love novel called Kevin Tsai’s love messages: The unknown lover <蔡康永愛情短信─未知的戀人>. Kevin expressed that he was happy that the Chinese society was starting to accept homosexual artists into their cicle.

Having no regrets about declaring his sexual orientation, Kevin said, “We (and boyfriend) were resistant of pressure. A life is bound to have pressures. I always fence off whatever that comes into the way”.

Kevin also shared his three secrets to maintaining a happy relationship – luck, learn and concern. To Kevin, concern is the most important and showering gifts to partner and travelling together are expressions of concern.

Kevin dislikes quarrelling with boyfriend and will first find out the cause of the quarrel. Kevin also shared that his boyfriend would appease him with his favourite food and drinks and he would calm down after that. Kevin thinks that the happiest thing his boyfriend has done is to pick him up after work.

In their 10th year of relationship, Kevin has no intention to start a family, Kevin said, “We don’t intend to find a surrogate mother and has no plans for any kids. I am worried that I would not be able to teach my kid well”.