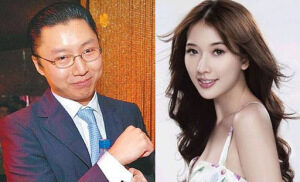 Earlier, Jerry Yan (言承旭)was rumoured to tie the knot with Lin Chi-ling (林志玲) after he bought a new mansion. However, the Taiwanese model was spotted recently with businessman ex-boyfriend Qiu Shi Kai (邱士楷) on a house hunting trip together in Shanghai, fuelling speculations if the pair had rekindled their romance.

At a recent interview, Chi-ling also expressed her intention to get married before the age of 40. Turning 38 next month, Chi-ling was speculated to view the ‘love nest’ with the businessman.

A netizen uploaded online a back view of Chi-ling walking into a building and wrote, “Chi-ling is here. Her legs are sexily long.”

Another netizen also posted online a photo of Shi Kai’s side profile and commented, “This is Lin Chi-ling’s husband. Lin Chi-ling came here with him to view a house.”

Netizens claimed that Chi-ling became anxious when she was recognised by people. Shi Kai, on the other hand, wore a pair of sunglasses to avoid being recognised.

When the news first exposed, Chi-ling denied looking for a property in Shanghai and only stated that she was there to work. However, when the photos surfaced, Chi-ling’s manager changed her statement and indicated that the model viewed the property due to a friend’s recommendation.

Asked if Shi Kai accompanied Chi-ling to view the property, her manager did not answer directly and replied, “I think it’s not appropriate to ask me.”

Jerry was suspected to be disturbed by the reconciliation rumours between Chi-ling and her ex-boyfriend that he lost his concentration during the filming, and fell to the ground while shooting a skating scene.

The love triangle of Chi-ling, Jerry and Shi Kai first sparked off when the two men showed a lot of concern to her when she fell from riding a horse in 2005. While Jerry visited Chi-ling at the hospital, her other suitor, Shi Kai sent her flowers and a card which wrote “Missing you”.