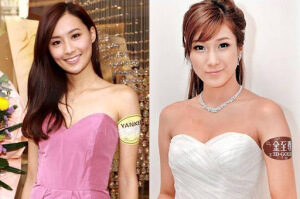 Is it the end of Fala Chen’s (陳法拉) music career?

There were rumours that Fala had offended the CEO of Stars Shine, Herman Ho (何哲圖) and her music career might end with only one album. On the other hand, Stars Shine will instead invest more resources into Linda Chung’s (鍾嘉欣) new album and prepares her for the music awards next year. To increase Linda’s exposure, her new album will also launch in November to coincide with her slimming advertisements.

An insider revealed, “Fala has a strong backing and naturally, her album will be given the priority. Actually, all the staff in the recording company were very courteous towards Fala. However, Fala demanded too much and complained on everybody.”

In addition, Fala reportedly offended her boss, Herman Ho. According to the insider, Fala allegedly turned a deaf ear to her boss’ advice when she was told to practise her singing. As a result, Fala’s album did not do well and prompted the company to groom Linda instead.

Speaking about Linda, her boss, Herman had nothing but praises for her. “Linda has always been a singer who will be invested in the long run. She puts in a lot of efforts in every song and it is so rare.”

Asked about Fala, Herman Ho said, “When I signed Fala, it is only to fulfill her dream as a singer. That’s why after launching an album for her, we will not help her again.”

Responding to being a favourite in the recording company, Linda said, “Let’s not talk about such things. I will do my best.”

Talking about her music career, Fala said, “I am currently filming drama till the end of the year. I won’t be launching my album that fast!”

When asked if she was worried to be replaced by Linda, Fala replied, “Not at all! Since the recording company supports Linda, I will congratulate her!”