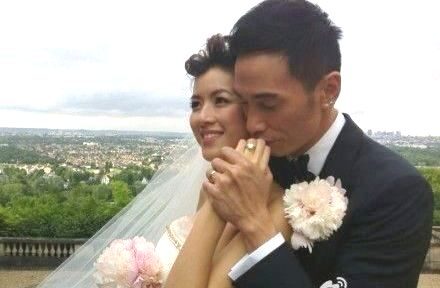 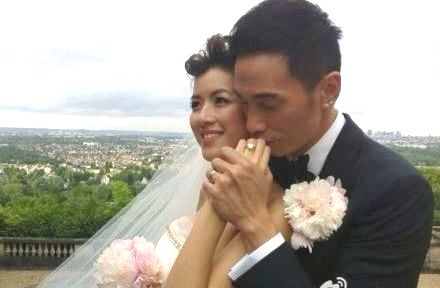 This morning, Aimee Chan posted a wedding photograph of her and Moses Chan on Weibo and announced their wedding news. Set at the backdrop of Toronto, a blissful Aimee wore a white gown while a loving Moses embracing her and kissing her hand passionately. The couple also displayed their wedding bands.

Aimee posted in her Weibo, “We are married! The next chapter to our life story begins today… Merci à tous!”

While TVB has been persuading the couple to grant them the exclusive broadcasting right to their wedding, the couple’s sudden announcement came as a surprise to many.

42-year-old Moses and 32-year-old Aimee fell in love while filming Master of Play <心戰> in 2011. Their relationship was exposed after Moses was spotted spending a night at Aimee’s place.

Aimee was rumoured to be pregnant after a sudden withdrawal from a new drama, Cold Mountain, Hidden Dragon <寒山潛龍>. Moses has not addressed the rumours, but stated that he had plans to get married and would bow out from the showbiz after marriage to manage his cafe business.

Many fans have since sent their blessings to the couple. Some fans have even started to address Aimee as Mrs Chan.