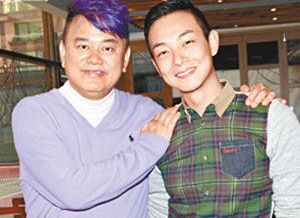 Oscar Leung is currently embroiled into a legal suit with restaurateur Kenny Wee. Oscar is implicated into the picture when he stated that Kenny had “persecutory delusions”, after the latter said that he had been slapped by Eric Tsang.

After the incident, Kenny demanded Oscar to make a public apology otherwise he will sue him for defamation. As Oscar did not apologise within the deadline, Kenny proceeded to sue him for libel on 28 December 2012.

The TVB actor admitted that he did not make any public apology and has already received a lawyer’s letter from Kenny. As the case is currently in the judicial process, Oscar said that he was not convenient to discuss it publicly. During this period, Oscar said that he had the support of friends and family.

“It touches me that many friends called me. They all wanted to recommend their lawyers to me. Some even said that they would lend me money to fight the case. I feel like crying upon hearing their words!”

Oscar added, “It is fine to do something wrong, as long as you do not commit a crime”.

After returning from his vacation, Natalis Chan (陈百祥) immediately called Oscar upon hearing that he was depressed over the legal case. “He said that he was vexed over buying a whole turkey or half turkey during the Christmas day. If I know it earlier, I will send him two turkeys,” said Natalis.

The veteran actor also said to Oscar, “Do you need help? I can recommend lawyer to you. If there is a need, I will lend you money for the legal case”.

Natalis further expressed that he did not understand why Oscar was the only implicated as there were many artistes giving their opinions on the assualt case.

“Do not drag the youngster into the picture. If there is a need, just come after me. Maybe Oscar is very popular nowadays, but there will always be justice. I will support Eric Tsang and Oscar!”

As Sharon is good friend with Oscar, she pledges her full support to him. Asked if Oscar confided in her, Sharon said, “When I knew about it, I immediately called him. We often bump into each other and I do not feel that he is unhappy. However, it is afterall a legal case and it is an unpleasant matter. I asked him to confide in me. This is what friends are for”.

Sharon also said that she was ready to lend money to Oscar and could recommend some lawyers to him too.

Another good friend of Oscar, Mandy Wong also wished that the matter would be resolved soon.

On the other hand, Kenny declined to respond to the matter as it is currently handled by the police and the lawyer. Eric also did not respond on the matter.

A recap on the matter

5 Dec: Kenny attended Karman Cheng’s wedding. Eric was rumoured to slap Kenny because of the drug scandal. Kenny reported the case to police and Eric went to the police station to assist investigation.

6 Dec: Oscar who was a guest at the wedding commented on the slapping incident.

23 Dec: Kenny issued a legal letter to Oscar and demanded him to make a public apology within the stipulated deadline, or faced further legal action. Oscar handled the matter to his lawyer and declined to respond.

25 Dec: During an interview, Oscar implied that Kenny was like a locust, an annoying pest which fainted at his balcony after trying to fly through his glass window. He said, “Hong Kong is a country with freedom of speech. Every news has the right to make comment and it will not constitute to a libel”.

31 Dec: Oscar declined to comment on the matter and said that it was handled by his lawyer.