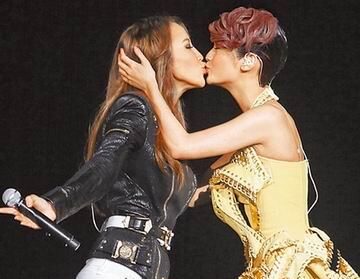 Besides singing in mid air and hanging herself upside down, Rainie also plunged into a water tank and submerged herself for 20 seconds.

Rainie’s final concert invited her idol, Coco Lee as a performing guest. During the rehearsal, Rainie cried upon seeing Coco.

“I used to sing her song during competition. The audition song that successfully signed me with Sony was her song, Think of you everytime <每一次想你>. I get very emotional when I see her”.

During the concert, the 28-year-old also shared a one-second kiss with her diva.

At the post-concert celebration, Rainie revealed that she had suffered rashes at her forehead whenever she practised the upside down hanging performance. As a result, she needed to wear a mask or cover the rashes with her fringe or heavy makeup. She also suffered bruises and injuries performing her stunts during the show.

With a strong-willed character, Rainie did not let her mother know about her rashes. “I do not want to admit defeat in front of others. Since practising the upside down hanging, I did not inform my mother about my rashes. Nobody will get to see the weak side of me”.