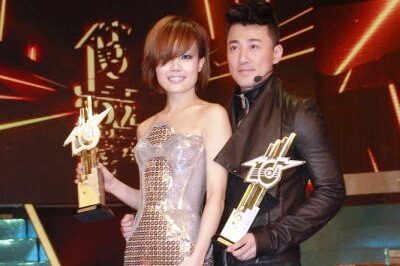 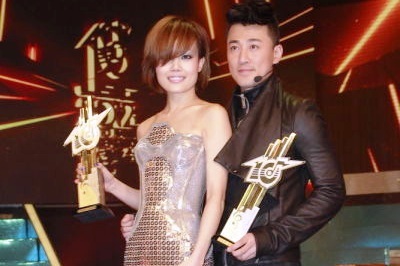 Earlier, Raymond was reported that he did not crave for any awards. However, during his acceptance speech, Raymond clarified and said, “I have never said that I do not want any trophy. I want to thank every member of my family and all the fans that have supported me all the way”. Besides winning the Most Popular Male Singer, Raymond’s song The naive ended <幼稚完> and Nodding stone <頑石點頭> won the Top Ten Golden Songs and Most Popular Chinese Song (Bronze).

Joey Yung also took home Most Popular Female Singer and it was her 8th time bagging this award. She also swept away the Most Popular Commercial Song, Top Ten Golden Songs, Most Popular Chinese Song (Gold) and Most Popular Duet Song with Mag Lam, The Chasing Kite <追風箏的風箏>.

Cantopop female duo, Twins won the Asia Pacific Most Popular Female Singer. An emotional Charlene Choi was weeping when receiving the award with Gillian Chung. “The last time we took the award was in 2007. Since then, we have been separated and encountered different experiences. Actually, our road to stardom was not that easy”.

G.E.M. Tang recently criticised the 2012 Ultimate Song Chart Awards for lacking fairness. Receiving her trophy on stage for winning the Top Ten Golden Songs and Most Popular Singer-Songwriter (Silver), G.E.M again hinted on the bias of the Ultimate Song Chart Awards, “There are much injustice in this society. I feel that everyone should not yield to any power as it is everyone’s right to seek an equality”.

G.E.M. was also harshly blasted by Jenny Tsang for being disrespectful. When asked by the emcees what she had to share with the newcomers, G.E.M. said, “I hope that everyone will greet people upon meeting them and this does not just apply to veterans or peers. Everyone should just greet people”.

Due to the music royalties’ issues with the four recording labels; Warner Music, Universal Music, EMI and Sony Music, many reputable artistes (Eason Chan, Khalil Fong, Pakho Chau, Kary Ng, Shiga Lin and Mr.) were absent from yesterday awards ceremony. Hence, there were controversies about the winners and questions arised if the awards presentation was a ceremony for “TVB’s own people”.