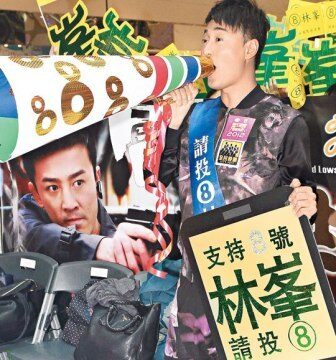 Yesterday, many TVB artistes canvass votes actively for the TVB Anniversary Awards. Despite being a hot favourite for TV King, Raymond Lam solicited votes aggressively at the eve of the awards ceremony too.

Raymond’s fans came in waves to support their idol. Although having a large pool of fans, Raymond continues to draw votes aggressively and hopes to clinch the TV King title.

Appearing as a guest star in a musical show, Raymond was suddenly kissed and touched by Meg Lam (林建明)during his singing. Startled by Meg’s advances, Raymond immediately blocked the kiss with his hands.

“It was not planned during rehearsal! Please do not touch all around,” exclaimed Raymond.

Raymond did not forget to solicit for vote too and asked Meg, “Did you vote for me?”

Raymond also revealed that he even approached Eason Chan’s mother to vote for him. “I asked Auntie to vote for me but she did not recognised me. She even asked which district I was representing!”

Raymond also said that it was time for him to win the TV King title. “I was nominated many times and I am in my 30s now. I hope to win the award too. It is good timing now!”