Samantha Ko in tears over rumours with TVB boss 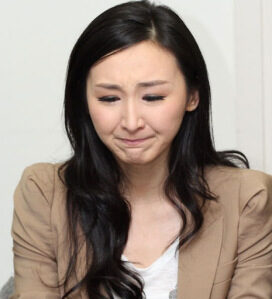 Rumoured with TVB majority shareholder, Charles Chan (陳國強), tabloids claimed that Samantha Ko (高海寧) was groomed overnight by TVB and was featured prominently in many series this year.

The 25-year-old actress reportedly filmed 5 series this year and is comparable to the number of series filmed by the A-list actresses, Tavia Yeung (楊怡) and Linda Chung (鍾嘉欣).

On the other hand, Kate Tsui (徐子珊) who was once rumoured with Charles Chan only has one series, Highs and Lows <雷霆掃毒> this year. Samantha is reported to have replaced Kate in the TV station. Having a voluptuous figure, rumours have it that the production crew had addressed Samantha as the “lady boss” privately.

Together with TVB Deputy Director of External Affairs, Tsang Sing Ming (曾醒明), Samantha dismissed the rumours. Although this is not the first facing scandalous reports, Samantha is still deeply affected by it.

Said Samantha, “I know that the reported party is my boss, but we have not even contact before. The reports have also affected my parents and caused them to worry. The rumour is making everyone unhappy”.

Responding to being addressed as “lady boss” within TVB, Samantha broke down in tears. “I feel so shocked and unjust. I do not know how to explain and feel so helpless,” said Samantha.

Samantha also said that although Kate was implicated into the report, she had even turned around to console her.

TVB Deputy Director of External Affairs, Tsang Sing Ming said that the company would take legal action against the magazine for its fabricated reports. The reporters from the publication will also be prohibited from interviewing its artists until further notice.

“We need to protect our artists and safeguard the company’s interest and reputation. As this is solely a fabricated report, we will not deal with it like before. The legal action is to prevent similar fabricated reports from happening again. If we do not take any action to stop it, these rumours will just continue,” said Mr Tsang.