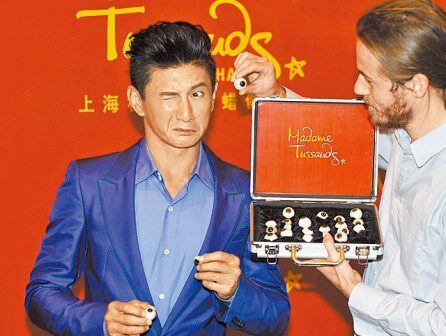 Best known for his ‘Fourth Prince’ role in the mainland series Scarlet Heart , Nicky Wu(吳奇隆) swept many women off their feet as the cool and passionate Emperior Yongzheng.

As such, the Shanghai Madame Tussauds is going to add a waxfigure of Nicky’s classic character as ‘Fourth Prince’ in summer next year. The waxfigure creation team has also flown in from England to take the measurements from Nicky. While his face is being measured, Nicky never fails to liven up the atmosphere by rolling his eyes, squinting and making quirky actions.

During the interview, Nicky also admitted that his big nose might pose a challenge to the waxfigure creation team. Asked if his nose was bigger or Jackie Chan’s, Nicky replied, ”Brother Jackie’s nose should be slightly bigger”.

During the three-hour measurement, Nicky could only wear a tight fitting shirt and shorts. When asked if he was anxious about taking measurement at his bottom area, Nicky was slightly embarrassed and replied, “I don’t think the area will be measured. The waxfigure will still be wearing clothes.”