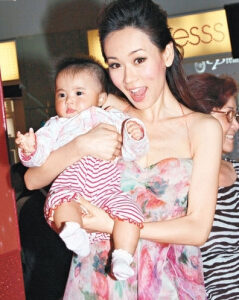 Last year, Shirley Yeung (楊思琦) broke up with ex-boyfriend, Gregory Lee (李泳豪) for another man, and then later become unmarried mother. She returned to Hong Kong with her baby, Krystal earlier this year and resumed her work. At the same time, Shirley also announced that her relationship with Krystal’s father, Andy Ng (吳帥) was over.

As it was the mid-autumn festival, Shirley was having a dinner gathering with her family two nights ago. Her baby’s father, Andy was missing at the family gathering. Shirley was wearing her shades throughout the dinner and was uncomfortable when recognised by patrons of the restaurant. After an hour, the group finished their meal and left the restaurant.

After leaving the restaurant, Shirley proceeded to the carpark to retrieve her car. Upon spotting the paparazzi, Shirley’s mother called Shirley and informed her. When Shirley drove her car out, she immediately rushed towards the reporter and questioned him, “Why are you taking pictures of me?”

Although the reporter was apologetic and explained that he was only doing his job, Shirley was still visibly frustrated. Her father then threatened to call the police and attempted to snatch the camera from the reporter.

Although Shirley had calmed down after the police arrived, she was still mad at the reporter.

“I am only having a dinner with my family to celebrate mid-autumn festival,” said Shirley to the reporter.

When reporter told Shirley that Sonija Kwok (郭羨妮) was generous about letting the media photographed her and her baby, Shirley immediately said, “She is different from me!”