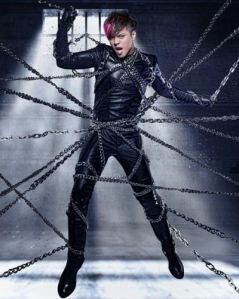 For his upcoming concert next year, Show Luo (羅志祥) has taken a NT$100 million insurance coverage on his legs!

Show is planning to perform dangerous stunts to his fans at the concert scheduled on 4th and 5th January 2012 at the Taipei Arena. Show will be tied with metal chains around his body and elevate to a 4-metre platform. He will then need to break himself free from the chains under the explosive smoky effects. The final challenging stunt will require Show to jump down from the platform.

Although there will be safety measures during the concert, his management company is still worried that he may injured his legs and hence provides for an insurance coverage on his legs.

The humorous pop idol joked on his $100 million legs, “So they (legs) are diamond legs!”

Show’s mother is extremely worried for her son and has even gone on a vegetarian diet to pray for Show’s safety. Knowing that his mother is jittery about his stunt, Show lied to her that there would be a stunt man during the diving act.

However, Show’s mother quickly saw through his lie and replied to Show, “You are my son! I know what you are up to. Do not try to cheat me!”