TV King and Queen title to be bestowed by viewers, Raymond Lam tipped to win! 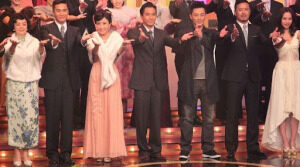 Two days ago, TVB held its light up ceremony for its 45th Anniversary and promoted its anniversary dramas. Many artists such as Raymond Lam (林峯), Kenneth Ma (馬國明), Wayne Lai (黎耀祥), Moses Chan (陳豪), Tavia Yeung (楊怡) attended the ceremony and took the opportunity to introduce their new dramas.

TVB has announced that the upcoming 2012 TVB Anniversary Awards will be voted by the Hong Kong public. Held on 17 December 2012, all the awards categories including the coveted title of the year, TV King and TV Queen will be decided by public.

Unlike the previous years in which the winners were decided by TVB top executives, this year, the management staff will only be involved in drawing up the nomination list. The refreshing voting system will prevent the executives to cast their votes for their preferred artists which was pointed out by the public in previous years.

As the anniversary dramas “The Confidant” <大太監> and “Silver Spoon, Sterling Shackles”  end on 16 December and 14 December respectively, the voting will start after the finale of the dramas. Viewers will have 24 hours to cast their votes before the awards ceremony on 17 December.

As Raymond Lam has in recent years, ventured into the arena of television, films and music, he has a huge fans base. It is believed that he will have an edge over the other contenders.

Speaking about his chances, Raymond said, “Every artist have their fans. I admit that I have the added advantage of having a television fans as well as music fans. I hope that they will vote for me.”

Raymond also spoke that his confidence level had increased. “Frankly speaking, there is (increase of confidence). I was nominated in the past, but I was not sure what the judging panel was looking into. Everyone had their own perspective. Now, winning the awards is more simple and clear cut. It’s just more or less votes. My confidence has increased.”

Wayne Lai thinks it is fair to let public decide

When asked if his fan base which mainly comprise the matured viewers would affect his chances, Wayne Lai said, “It’s not necessary so. It’s very common for office ladies and housewives to surf the net via the phones or computers. I feel that one-person-one-vote system is fair.”

As Wayne had clinched the TV King title twice, is he taking it easier this year? “Definitely so because there was recognition already.”

As Moses Chan’s drama “The Last Steep Ascent”  is currently airing, he is also said to be a strong contender.

Agreeing that the winners should be decided by viewers totally, Moses said, “I totally agree that viewers should participate. The more participation, the better. It’s best that the judging panel select the nominees and let the viewers decide. It will have an edge if there are more fans. However, winning or losing is not important.”

Kenneth Ma: “Any results are possible.”

Being a dark horse for the TV King title, Kenneth Ma has a good year in 2012. His performance in “The Hippocratic Crush” <On Call 36小時> and “Three Kingdoms RPG” have garnered rave reviews from the viewers.

“I will just take it easy. It is the first year that all the award categories are publicly voted and anything is possible. The viewers will decide based on their preference. At a certain extent, it lacks of the professional judging criteria. This year, any results are possible. There will not be any unexpected results.”

Speaking about his chances, Kenneth said, “The Hippocratic Crush and Three Kingdoms RPG have good reviews and it enhances my competitiveness. However, these dramas were aired earlier. The dramas that are aired nearer the awards ceremony have an added advantage. As an actor, I am already satisfied if my roles are popular by viewers.”

Tavia Yeung: “I am bound to lose!”

Tavia Yeung’s role in “Silver Spoon, Sterling Shackles”  is believed to enhance her chances of clinching the TV Queen. However, Tavia said, “It will compete based on who has more fans. If counted by the number of fans, I am bound to lose!”

Asian Pop News:
We wonder how the fans will cast their vote between TV king / queen versus My Favourite Character. It is rather hard to draw a line between the both. Looks like Raymond is leading with his huge fan base.