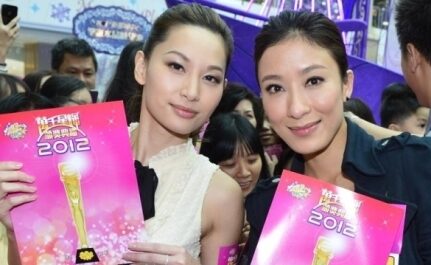 One more day to the 2012 TVB Anniversary Awards! Who will confer the TV King and TV Queen by the Hong Kong viewers tomorrow night.

All the nominees are gearing up to solicit viewers’ votes for the anniversary awards tomorrow. TVB will broadcast the nominees’ performances from their respective dramas in the programme, 2012 TVB Anniversary Awards – Ultimate voting campaign <萬千星輝頒獎典禮2012 終極拉票大行動> in the weekends. In addition, the various nominees will also appear on the programme to canvass for votes during the last two days of the awards ceremony.

Kate and Tavia battles for votes

At an earlier outdoor voting campaign, two hot favourites Kate Tsui and Tavia Yeung appeared together. Both fans also showed up in batches to scream for their idols.

Kate, who has all along canvassing for votes actively, wore a sash during the voting campaign. Kate revealed that she had already solicited votes from TVB Executive Chairman Norman Leung and TVB Executive, Virginia Lok. Asked if she would solicit vote from TVB major shareholder, Charles Chan, Kate replied, ”I will draw votes from everyone including those that I have not met before. I will not exclude anyone”.

Kate was spotted days ago with Mandy Wong praying at temple. Asked if she was bent on winning this time, Kate replied, “Please do not say that. I only wish to do my best. I do not have any religion. I only wish to account for myself and deliver my best”.

Tavia will not vote for Him Law

Aimee Chan expressed clearly that she would vote for boyfriend Moses Chan. Tavia said that she would differentiate business and personal reason. Hence, even if Him Law was nominated for the TV King, she would also vote for Kenneth Ma.

Asked if she was directing her comment at Aimee, Tavia explained that she did not mean to insult her but expressed that she did not have any personal reason only. For the Best Supporting Actor, Tavia siad that she would vote for Koo Ming Wah, but said, “But I will still support him (Him Law) in my heart, I hope he can win too!”

Recap the nominees for the TV King

Recap the nominees for the TV Queen