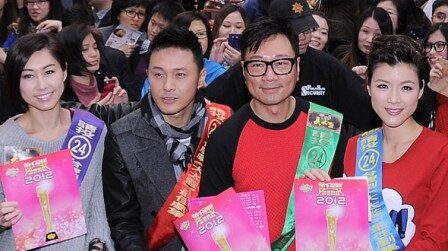 As this year TVB anniversary awards rolls out the public voting system for TV King, TV Queen and Best Series, many artistes have gone all out to garner votes for themselves.

Yesterday, Wayne Lai led his The Confidant co-stars, Aimee Chan, Nancy Wu, Raymond Wong, Raymond Cho, Power Chan and Elliot Ngok to Mong Kok and Tsim Sha Tsui to pull votes for the Best Series Award. Like politicians, all the artistes put on a sash with their series voting number, 24 printed on it.

As this is the second time in which Wayne participated in the voting campaign, it seems that he may have higher exposure as compared to the rest of his contenders.

Responding to his higher exposure, Wayne smiled and said, “It’s only coincidence. Today is a publicity for The Confidant. The rest of the artistes are so busy. Raymond Lam and Kevin Cheng is working in China and Moses Chan is in Singapore”.

“I feel that the voting campaign will not have much effect. Attending such event is not for myself. It is more to create awareness for the one-person-one-vote system”. ‘

Apple Daily has created an online poll for the TV King award and Raymond is currently leading.

Currently in the sixth spot, Wayne said, “It doesn’t matter. Everyone is only expressing their wishes and I also support Raymond. Since there is such a voting game this year, I am also happy to participate. There will be different opinions every year. Whoever win the award, I will be happy for him as this is entirely voted by the Hong Kong citizens”.

Nominating for the Best Supporting Actor, Power Chan is predicted by movie star, Chow Yun Fat to bag the award.

Responding to Fat-gor’s prediction, Power said, “I know that he predicted me and Koo Ming Wah to win. Fat-Gor is a TV drama addict and supports TVB”.

Asked if he was encouraged by Fat-Gor’s prediction, Power laughed, “It will not have any effect. The Best Supporting Actor is voted by the employees. The gain or loss is not within my control, so I will not think about it”.