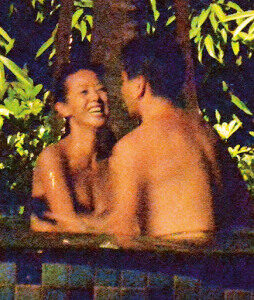 More party photos of Ron Ng (吳卓羲) and Toby Leung (梁靖琪) were splashed across Hong Kong tabloids. While filming for “Triumph in the Skies 2” in Sanya, Hainan, TVB actress Toby Leung was accused of flirting with her costar Ron Ng at a pool party.

Although the pair had denied their intimate behaviour at the party, the tabloids produced evidence of their hugging photos at the pool. As Ron had clarified that he only treated Toby as a sister and there was no kissing and hugging at the pool, Sudden Weekly published 30 photos and a voice recording of the pair’s behaviour at the pool.

While having a pool party in the wee hours, Ron Ng, Toby Leung, Stefan Wong and a few working crew were drinking hard liquor. As the group was probably drunk, they were heard hurling vulgarities.

During their wrestling game, Toby and Ron came into close contact and was photographed hugging at one another. As Toby wore a low cut bikini which revealed her deep cleavage, Ron was heard saying, “You have a good nutrition, it’s so difficult not to have any response! Wow… let me lick my saliva away first.”

The tabloids also claimed that Ron and Toby were kissing in the pool and holding hands while walking back to their hotel rooms.

Responding to the pool photos, Ron replied, “I and Toby are very familiar with each other. I treat her as a sister.”

Toby also responded, “He (Ron) is my brother. I have a tomboyish character and play this way with all the guys. Just for fun only.”

Asked if her husband will mind, Toby said, “He will not mind. He is happy if he sees that I have fun.”
Source: Sudden Weekly @ ihktv