Angela Chang launches MV for new song “How are you recently?” 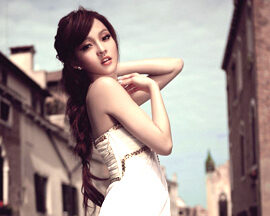 After taking a break for three years, Angela Chang (张韶涵) is finally launching her new album “Visible Wings” on 12 October 2012!

Yesterday, Angela launches her music video of her new title song “How are you recently?”  To bring to the viewers a beautiful love story, the MV was filmed in Rome, Milan and Venice. The story depicts a pair of separated lovers who have matured and grown more courageous after breaking up. When they finally meet again, they are able to ask one another, “How are you recently?”

The MV director initially wanted to include bed scenes between Angela and her lead actor but Angela raised her objections. Feeling shy about having intimate scenes with her lead actor upon meeting up, Angela told the director, “How can there be a bed scene when we just met only?”

The director instructed the lead actor to crack some jokes so that Angela can relax. However, Angela was still so tense and embarrassed. In the end, the bed scenes were all cut off.

Angela also wore a 15 cm high-heels to walk up the stairs in the MV. The filming was tough for Angela and she revealed, “It was very tough shooting in Italy. I only slept 2-3 hours a day and the temperature is almost 40 degrees. There is no white rice to eat too. However, it is worth it to present a beautiful scenery to my fans.”

Asian pop news:
“How are you recently?” is a love ballad that showcases Angela’s tender and yet powerful voice. Angela looks gorgeous in the MV with her long hair and the flowy dresses. Angela also seems to shed her cutesy looks and go for a more feminine look in her new album.

Watch Angela’s new MV “How you are recently?”