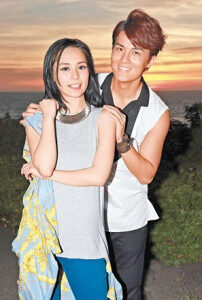 Promoting his sixth album “How to deal with loneliness”, Kenji Wu (吴克群) invited his rumored girlfriend, Gillian Chung (鍾欣桐)to lend her support at the promotional conference. Earlier, the duo was spotted dining together, but denied they were dating.

In his new album, Kenji sang a duet with Gillian in a song “Give everything to you” <全部都给你>. While performing the song on stage, Gillian nearly tripped when dancing with the song. Kenji went over to help Gillian and even said, “Such a serious and courageous girl is worth to be doted. I will cherish every meeting with Gillian.”

Gillian specially flew to Beijing to support Kenji for his new album’s launch. Kenji was moved by her gesture and expressed that he would be friends forever with Gillian, and promised to always be there for her.