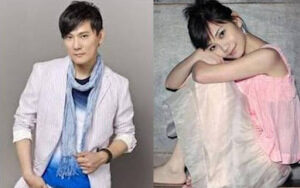 At a recent concert in Luoyang stadium, China, a concert by pop singers, Jeff Chang (张信哲) and Fish Leong (梁静茹) had unexpectedly turned into a scam!

As the organiser had promoted the show as a music concert by the duo, “Jeff Chang and Fish Leong’s concert” was splashed across the advertisements and posters. The tickets ranged from $199 RMB to $1,699 RMB, in which the pricing was similar to regular concerts. When the audiences turned up for the concert, it turned out that the show was only a promotional activity.

Jeff Chang terrified by the chaos

The show was supposed to start at 8.00 pm sharp, but was delayed for half an hour. Before the concert, there were tons of advertisements showing on the screen. When the concert finally started, there was no signs of Jeff and Fish, but instead, many unknown singers were performing on stage.

It was until 9 pm when Fish finally performed, but she left after singing only three songs. Audiences were starting to get impatient and shouted for Jeff Chang. The situation got very chaotic and some audiences even went up the stage to request for a refund and smashed at the sound system and equipment.

At around 10 pm, Jeff finally appeared on stage and greeted “Hello” to the audiences, but the audiences threw bottles, chairs and neon glow sticks up the stage. A netizen said, “Jeff Chang was already preparing to sing, but he was so scared by the chaotic situation and ran to hide behind the stage.”

The police had to intervene to restore the order. The audiences then dispersed half an hour later after being promised of a refund.

Local authorities have investigated that Jeff and Fish’s agreement was to perform three songs each. Hence, they have classified the case as a fraud, and would investigate thoroughly on the organiser. On the other hand, a staff from the organiser was heard telling the police that the chaos occured because Jeff was late.

Through a public statement, Jeff stressed that the programme schedule was arranged by the organiser, and it was already very chaotic before he got on the stage. As the crowd was uncontrollable, the officials then led him down the stage in consideration of his safety.

Both Jeff and Fish’s managers also responded that their agreement was a promotional activity and not a music concert.
Source: et.21.cn, sina.com