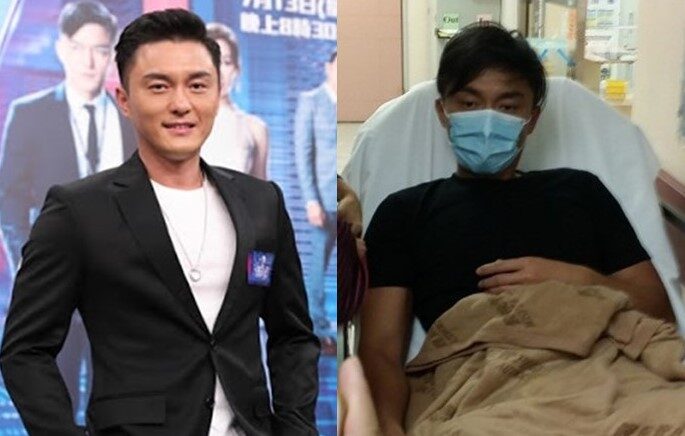 TVB actor, Matt Yeung was arrested on August 8 past midnight, for refusing to provide blood sample after he crashed his car in Mid-Levels area. Matt’s Mercedes reportedly lost control during a turn, drifted into opposite lane and hit the barrier. The right side of his car front was badly damaged.

When police arrived, Matt reportedly reeked of alcohol and could barely walk. After a preliminary investigation, police arrested him on suspicion of “refusing to provide blood sample”. He was released on bail, and had to report to police station in September. Matt’s girlfriend, Lisa Ch’ng, and her sister Jacquelin Ch’ng were at the scene on the day of the accident.

After the accident, Matt responded through TVB news program Scoop <東張西望>, but did not clarify if he was drinking on the day of accident. The actor said that he had undergone x-ray after hurting his head and pelvis, and that test result showed he did not sustain any injuries.

“After the accident, I totally blanked out. I had no recollection of what happened, how the car crashed, and how it stopped. After I read the report, it said someone held me, and said I was drunk and I needed somebody to hold me. I was more giddy after the car crashed, and I was not clear-headed enough to do a breathalyser test. The police wanted to save me quickly as the car was hanging at the side of the mountain.”

Matt is a rising star in TVB. He has taken the lead roles in consecutive 3 dramas, ‘The Defected’ (鐵探), ‘Airport Strikers’ (機場特警) and ‘On-Lie Game’ (迷網) lately.

This is not the first time he has got into drink driving offence. In 2005, he was found asleep in his car that was parked in the middle of the lane. He was arrested after failing a breathalyser test and was fined HK$7,000.

For his car accident this time, legal professional said that the court may impose a custodial sentence on Matt, for refusing to provide blood sample for the test. The court will base on the existing evidence to decide if the driver drives under the influence of alcohol, and if he deliberately refuses to submit his blood sample. A jail sentence is possible.