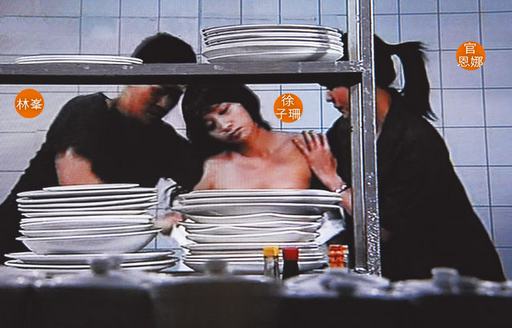 TVB action drama, “Highs and Lows” premiered with good ratings in Hong Kong, peaking at 33 points. Kate Tsui (徐子珊) delivered a striking performance as a drug addict who later turns into a drug queen in the drama. It is believed that this drama will boost her chances to clinch the TV Queen at the coming TVB Anniversary Awards.

Explosive highlights of the drama are featured below.

In order to earn more informer fees, Kate risks her life to hide in a freezer to eavesdrop for more information. However, she is being locked and subsequently fainted due to the low temperature. Luckily, Raymond Lam who plays a police officer (林峯) saves her.

In another scene, Kate will be raped by Ben Wong (黃智賢). Ben takes advantage of Kate’s unconsciousness after she takes drugs.

“I play a tragic character. I will also become a drug addict and inject myself with drugs,” revealed Kate. Kate also watched many movies related to drug addicts to play her role well.

MC Jin (歐陽靖) plays a comical character here. As he is unhappy that Kate receives a low fee as an informer, he decides to seek revenge on the police. Initially, he wants to throw a bag of grasshopper feces at Raymond, but is unfortunately locked in a cubical full of feces by Raymond instead.

Playing a hooligan, MC Jin is also bashed by triad members many times in the drama.

Ella Koon nearly falls off from a building

In order to prevent a muderer from killing a witness, Ella Koon (官恩娜) climbs from a water tank to save the witness. However, she nearly falls off from the building and is fortunately saved by Raymond.

Raymond revealed that the drama has many action and dangerous scenes. “There are many actions and explosive scenes in the drama. I have to run continously from day to night during the filming. Many working crew also said that TVB never has that many guns in the drama before. It is very expensive as it charges by the number of bullets!”

There are suspicions that the police force has a corrupted cop. Hence, Raymond is assigned to be an undercover to investigate the identity of the corrupted cop.