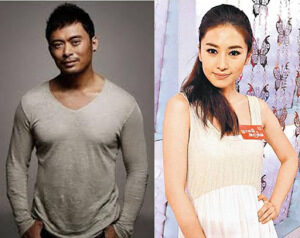 At an interview, Louis finally broke his silence and professed his love for JJ, “My love is unyielding, I will continue to walk the road.”

Louis had knew his ex-girlfriend, the mother of his two children in 1995. Revealing that his father had disapproved his relationship with his then girlfriend, he did not marry her even when she was pregnant. “My father had objected to our relationship, and he felt that it would affect my career. I kept it from him. Even when we had a baby, I dared not let him know. He was angry when I informed him that the baby was born. He thought that my future was gone. He always wanted me to become a martial arts star, and I could be an idol. Since the family objected, we did not plan to get married.”

In order to spite his father, Louis and his then girlfriend had another child in 2001. Seeing that his parents did not have a happy marriage, Louis also shared that he had a phobia in getting married. As there was monetary disputes between his mother and his then girlfriend, Louis parted ways with his girlfriend in 2007. Louis continued to provide for his ex-girlfriend and his children and gave them the financial support.

In 2008, Louis then began another new relationship with a woman in Hangzhou, China. The couple broke up after dating for four years. It was only in March this year that Louis met JJ at a wedding, and developed their romance after performing at a show together.

“After the show, we always kept in touch by phone and gradually developed our relationship. After the reports were out, we only started for a few months. Hence, she is defintely not a third party and absolutely not a fourth party. I did disclose my relationship with my ex-girlfriend and my children to JJ and my then girlfriend in Hangzhou. I did not cheat on them.”

Speaking that his relationship with JJ had grown stronger after the incident, Louis said, “Do not think that because I am well-built…. actually I am an indecisive  person and I can’t manage my relationships well, if not it will not happen this way. On the other hand, JJ looks fragile but she is a very determined and brave woman. We can complement each other. After this incident, I realised that I truely like her (JJ). She also supports me all the way and I am very touched. I thought about our future. Although I have a phobia in marriage, I had really think of getting married because of her.”