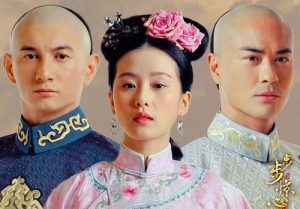 Time travel period drama, “Scarlet Heart”  will be filming its sequel end of the year!

Cecilia Liu (刘诗诗) disclosed that that she would reprise her role as Zhang Xiao and will travel back to the modern setting with the “princes”.  “4th prince” Nicky Wu  (吴奇隆) and “8th prince” (郑嘉颖) are also likely to return to the sequel of the mega hit drama.

Nicky revealed that he had already received a copy of the script from Chinese Entertainment Shanghai. Speaking about his expensive fee, Nicky said, “My feelings for ‘Scarlet Heart’ cannot be measured by the fees.”

Nicky also added, “From what I know, 80% of the the cast will likely be in the sequel, including Mentor Damian (Damian Liu 刘松仁), Cecilia, and 8th prince (Kevin Cheng).”

Kevin, who is currently filming mainland Chinese drama “Ip Man” also confirmed that he received a copy of script for “Scarlet Heart 2”.

“It’s very likely that I will film and I do want to film too! They had sent me a script,” said Kevin.

In the finale of “Scarlet Heart”, Zhang Xiao held on to the memory of Ruoxi and travelled back to the modern setting. At a museum, she met a man who resembled 4th prince, but the man could not recognized her. Zhang Xiao’s sorrowful expressions melted the audiences’ hearts!

Will Zhao Xiao / Ruoxi reunite with 4th prince or will she have a new relationship with 8th prince?

Regarding the sequel, Chinese Entertainment Shanghai revealed that the script is still incomplete.and still in the process of writing. However, it is understood that the “Scarlet Heart 2” is likely to use the original cast and will set in the modern world, in which Ruoxi and the princes will travel and develop their relationships in the modern city.