Kevin ‘frozen’ by TVB due to refusal to work with Charmaine? 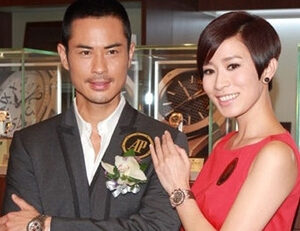 Rumours are circling that Kevin Cheng (鄭嘉穎) has offended his boss and resulted in him to be ‘frozen’ by TVB.

TVB Director of Drama Production, Catherine Tsang (曾勵珍) reportedly had the intention to cast Kevin in next year’s series, Cold Mountain, Hidden Mountain  alongside with Charmaine Sheh (佘詩曼). However, Kevin rejected to act with his ex-girlfriend and reportedly angered his boss.

Kevin refuses to work with Charmaine

An insider disclosed, “Catherine Tsang intended to pair up Kevin with Charmaine in Cold Mountain, Hidden Mountain. However, Kevin refused to work with his ex-girlfriend and even said to Catherine Tsang, ‘Are you kidding? How are we going to film? If you really want to cast Charmaine, please find other actors. I am not going to act!”

His words reportedly offended Ms Tsang so much that she passed down instructions to ‘freeze’ Kevin. In the end, Kenneth Ma (馬國明) replaced Kevin in the role and all the cast and script had to be changed.

At the sales presentation last month, Kevin was also missing from the important event. In the booklet for the series in 2013, Kevin had only two mainland series, Scarlet Heart 2 and Ip Man <葉問> and did not have any TVB dramas at all. On the other hand, Kenneth had two TVB dramas listed in the booklet.

As Kevin had offended the top management, there were rumours that his chance of clinching the TV King title again was greatly diminished.

When asked about his confidence for winning the TV King award this year, Kevin replied coldly, “I am not taking it so seriously this time. I still need to return to China for filming and I feel embarrassed to ask for votes. My bet is on Wayne Lai (黎耀祥) this time”.

Asked if he was replacing Kevin, Kenneth replied, “I did not know that the role was originally assigned to Kevin. I am not sure if I will film Cold Mountain, Hidden Mountain eventually. I only know that I am just filming the sales clip for the time being. The series that I am confirmed is The Hippocratic Crush 2<On Call 36 小時2> and it will be filmed next year in Feburary”.

Responding if she is returning to TVB to film series, Charmaine said, “It is decided that I will film in 2013 but everything is not finalised. I hope that I can give everyone a surprise”.