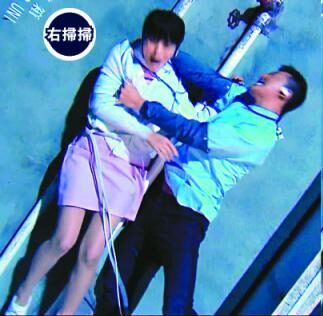 Since its broadcasting, TVB drama “Highs and Lows” have received positive reviews and ratings. Its premier week’s ratings averaged at 29 points and peak at 32 points. About 2 million Hong Kong viewers tuned in to watch the drama.

Playing a cool and dashing cop, Raymond Lam (林峯) has stolen the spotlight from his co-stars. Although the drama attracted many female viewers, there are male viewers who specifically catch the show because of their goddess, Ella Koon (官恩娜).

In a rescue mission in episode 9, Raymond accidentally touched Ella’s chest and caused some displeasure from Ella’s fans. In that scene, Ella nearly fell off a building while saving a hostage. While pulling Ella back to the balcony, Raymond’s hands seem to sweep across Ella’s chest.

One netizen wrote, “What are Raymond’s hands trying to do?”

Responding to the slamming by netizens, Raymond was shocked and said, “Huh? Is there such a thing? There is no contact at all. Probably, it is due to the camera angle.”

Ella also defended Raymond and said, “There is no such thing. There is no contact. It could be due to a angle issue. The action was too fast and it was due to the camera lens illusion. Raymond is a gentleman and very professional. We are happy working together.”