19 years have passed, how are the F4 members doing now? 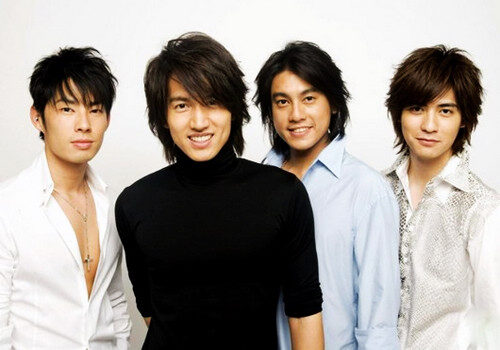 Jerry recently made headlines after pairing up with Shen Yue (also the new version of Shan Cai), 20 years his junior in ‘Count Your Lucky Stars’ (我好喜歡你). Due to their huge age gap, their pair up was widely criticised as drama fans felt that Shen Yue could pair up with a younger man.

However, after the drama was aired, Jerry has silenced his critics. He trained hard, to make himself look younger, and even displayed his remarkable physique in a bathroom scene. He has fans going gaga over his perfect body. To train for this ageless body, he has to workout at least 3 hours a day, and has a very bland diet with little seasonings.

His love life is still empty, after breaking up with Lin Chi-ling who is now married to Japanese pop star Akira. Last year, another of his ex-girlfriend, Seanna Chang stepped forward and confirmed that they had dated for 2 years.

Although married with Chinese actress Han Wenwen for 4 years, there is no baby plan for Ken at the moment. He revealed recently that he had Fibromyalgia, and it’s due to genetic problem.

He is also afraid that his kid would inherit his condition, and hence, hesitate about having a baby. After discussing with his wife, they both agreed to freeze his wife’s eggs first, or a possibility of adopting a kid in future.

Vic married Taiwanese actress Reen Yu in 2015, and the couple has a daughter. Vic has reduced his work after marriage, and only in recent years, started filming mainland dramas, ‘The Flame’s Daughter‘ (烈火如歌) and ‘Beauties in the Closet’ (櫃中美人).

Recent reports said that ‘Meteor Garden’ director had invited Vic to star in a Taiwanese drama. If this is true, his Taiwanese fans will be elated. Although at 39 years old, Vic still maintains his looks well, and still enjoys great popularity.

Vanness Wu married Singaporean heiress Arissa Cheo in 2013, but their marriage only lasted 5 years. After resuming his single status, he is filming movies as well as establishing his own fashion label. Even famed Japanese fashion designer, Yohji Yamamoto has partnered with Vanness to create a line of sneakers.

Recently, he also co-hosts with Sam Lee and Kris Wu in Chinese variety programme, ‘Where are the fashion people’ (潮玩人類在那裏). The variety programme seeks to look out for young designers and the latest fashion trends.